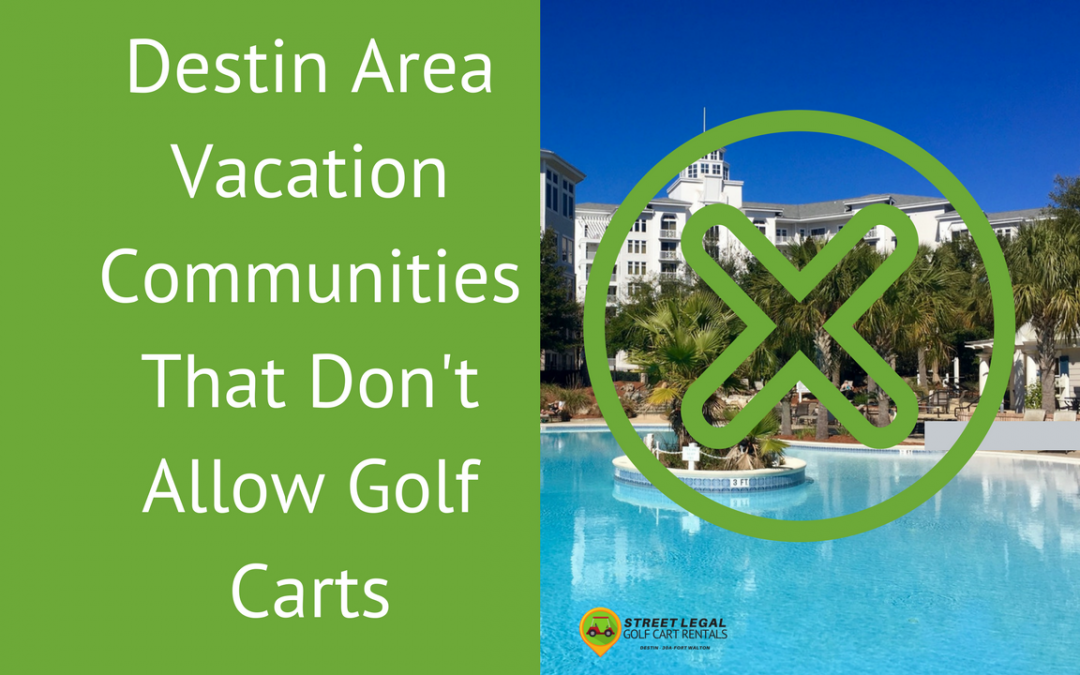 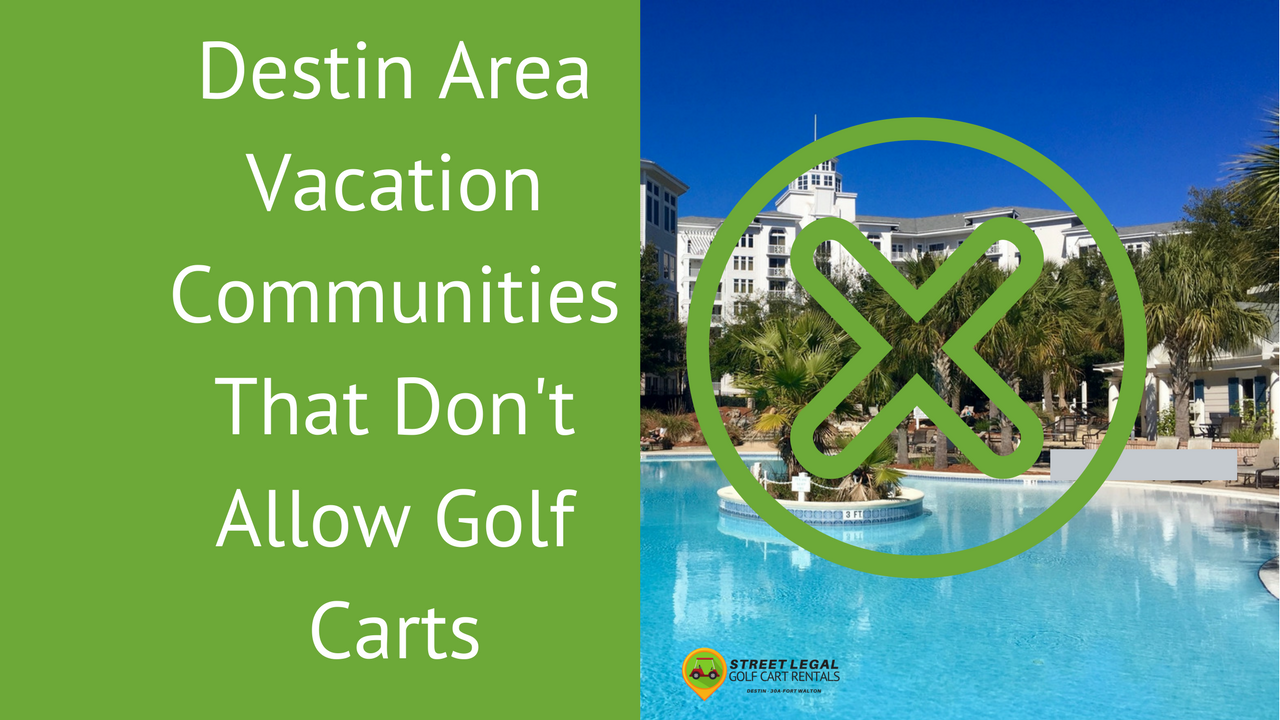 What’s not to like about golf carts? They are cheaper and more energy efficient than cars, and they are convenient, fun, and easy to drive. But some communities do not allow golf carts, legal or otherwise, or have extremely strict rules regarding who, where, when, and from which company, a golf cart can be used. Please note, you are solely responsible for any citations or fines attached to our rental golf cart during your rental period.

Here is a running list of Destin – 30a area communities that do not allow golf carts or have strict rules about them:

This list is meant to be exhaustive. If you know of a community that doesn’t allow golf carts, please contact me today. 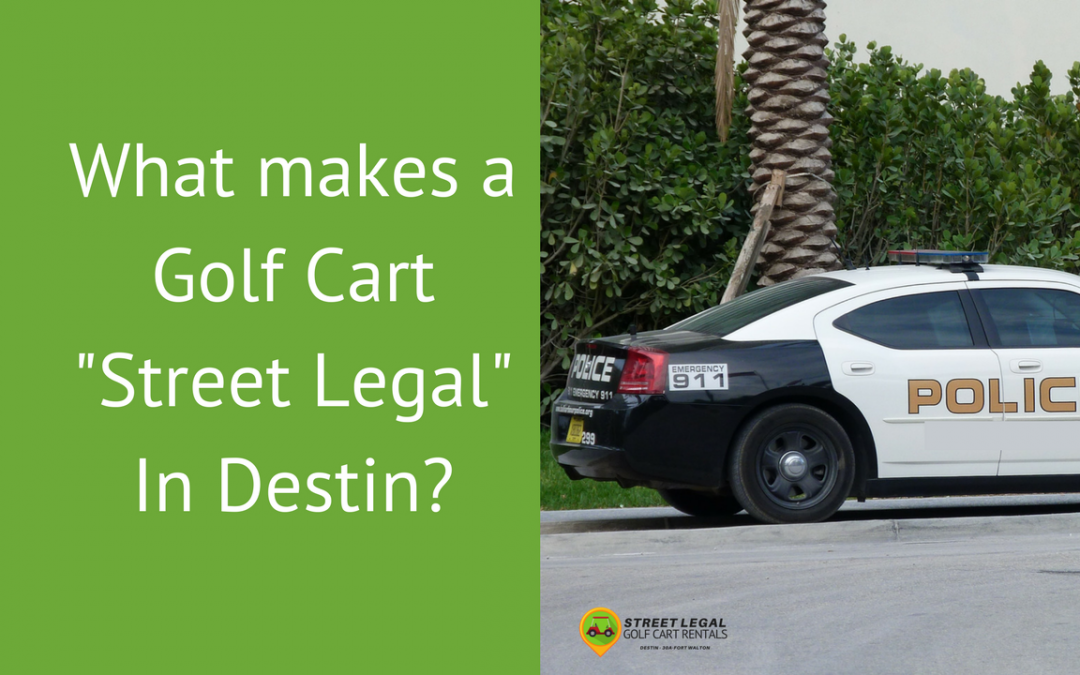 Additionally, this Florida Statute goes on to say a “Street Legal” golf cart in Destin and Walton County, “…must be registered and insured in accordance with s. 320.02 and titled pursuant to chapter 319. This is the same registration laws governing regular automobiles.

If you happen to get pulled over while driving a golf cart, make sure that you have your insurance and registration available just like you would in a car or a truck. The police officers will be asking for this information. Better yet, don’t get stopped by the police. Follow the same rules of the road you do with the car with the exception of not being allowed to drive on roadways with a speed limit above 35 miles an hour.

When it comes to golf carts and street legality there is an important distinction that needs to be made clear. Low speed vehicles (LSVs) and golf carts are treated differently under Florida law, although to look at them both you would probably call both of them golf carts. So what are the differences here?

LSVs are defined by Florida law as a four-wheeled vehicle whose top speed is greater than 20 mph but less than 25 mph. LSVs also comply with federal safety standards for vehicles this means things like turn signals, headlights, and mirrors to name a few of the common aspects. As long as you have these proper things like seat belts etc, and the vehicle is registered and insured, it is legal to operate on roads where the speed limit is 35 mph or less. This means anyone operating the LSV must be 18 years or older and have a valid driver’s license. Pretty much the same rules that apply to a normal vehicle apply to LSVs in order to make them street legal.

Golf carts that don’t meet all the safety requirements to be a LSV are not going to be permitted on state roads, but depending on the municipality or town that you are in their use may be allowed in special circumstances. The interesting thing about golf carts is that you only need to be 14 years of age or older to operate these vehicles, but you won’t be able to take them on many main or municipal roads in most cases unless you are registered and insured and comply with all federal safety standards for motor vehicles.

This overview should help when figuring out where you can and can’t take your golf cart or LSV! 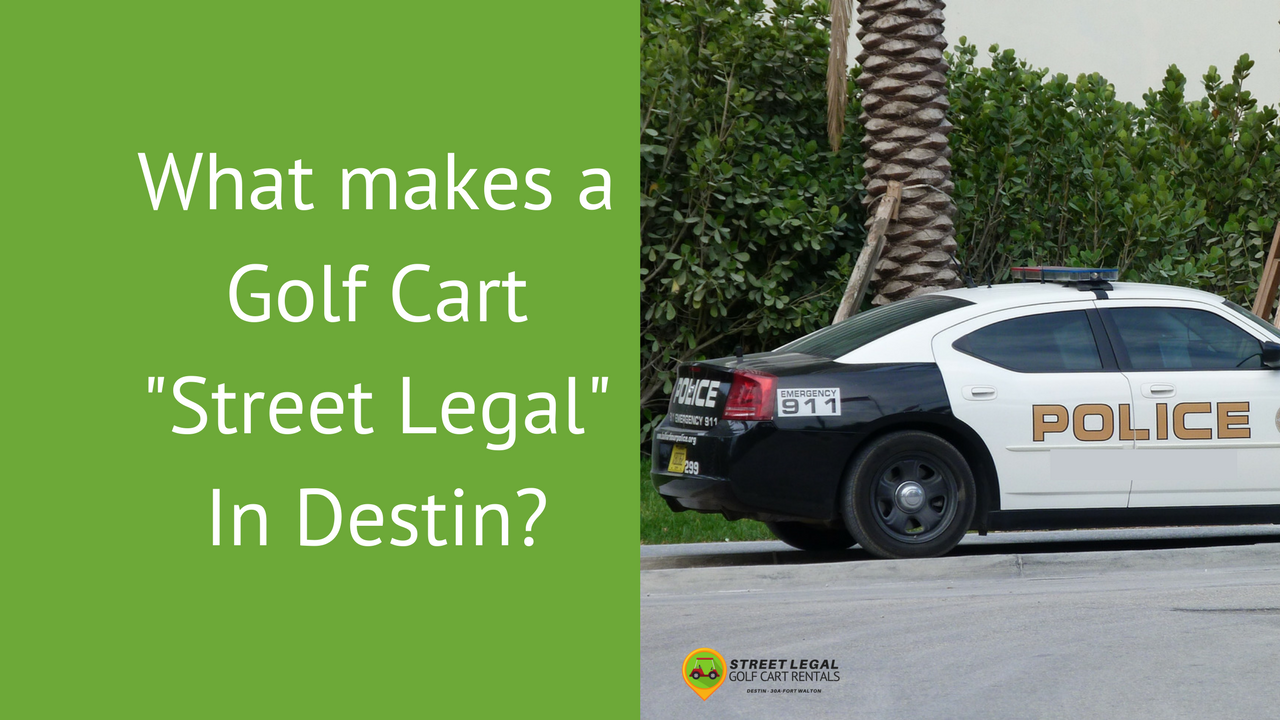 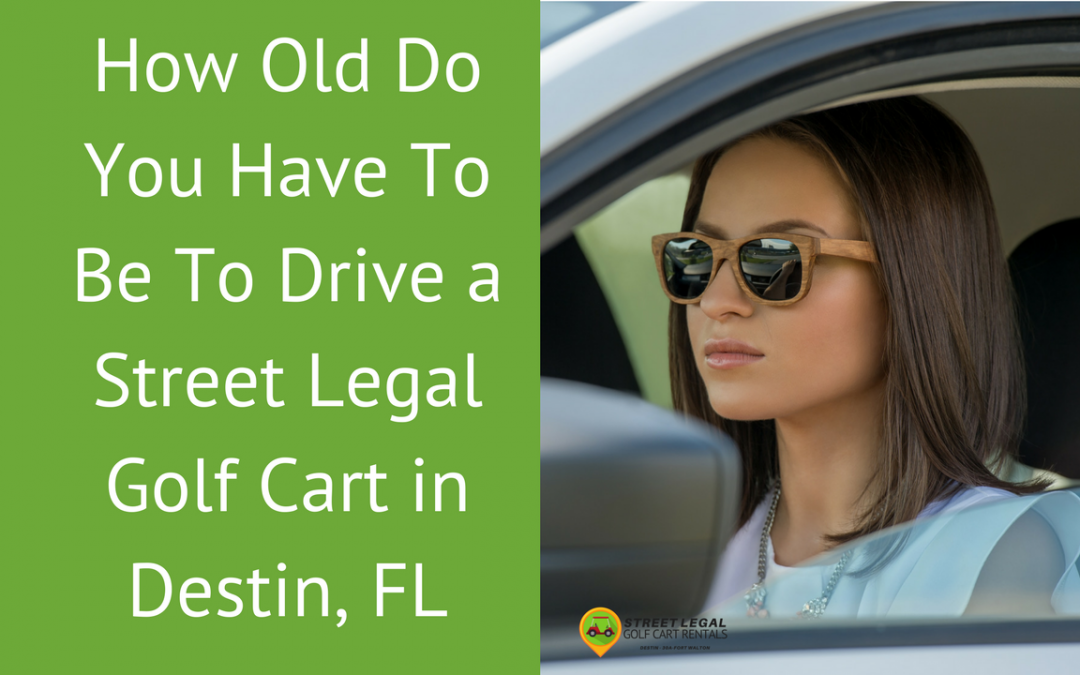 How Old Do You Have To Be To Drive a Street Legal Golf Cart in Destin, FL (and 30A)

If you’re heading out for a vacation in Destin or on State Road 30A in Walton County Florida, and have already thought through all the perks of renting a street-legal golf cart to make your stay more convenient and comfortable, you may now be thinking through the logistics of your stay. If you’ve got teenagers in your family or visiting during your stay, can they take the golf cart and head to the beach on their own? Who can legally drive a street-legal golf cart?

According to Florida Statute 316.2122, “Any person operating a low-speed vehicle or mini truck must have in his or her possession a valid driver license.”

Florida law says that anyone with a valid driver’s license is allowed to operate a “low-speed vehicle,” which is the technical terminology that distinguishes a typical golf cart from a street-legal one. The differences between a regular golf cart and a street-legal golf cart have to do with the equipment that makes it safe for the road such as parking brakes, headlamps, and turn signals. Essentially, street-legal golf carts have been equipped with all of the necessary parts to make sure they can follow the rules of the road.

According to the law, then, people as young as 16 who hold a valid license can drive a street-legal golf cart. However, it gets a little more complicated if you will be renting your golf cart for the duration of your stay. Rental companies are obligated to follow restrictions related to the insurance they carry. Most insurance companies will not allow a 16-year-old to drive the vehicle. To drive our golf carts, all drivers must be 21 years old and possess a current drivers license.

Don’t let this fact discourage you from your rental! If you’ve got teens staying with you who need a lift to the beach, a golf cart piloted by an adult can be a quick way to drop them off without having to take a long walk in the heat and sun.

With all of the options you’ll have of places to visit, eat, dance, and relax, you won’t want your golf cart getting too far away from you anyway!